Translation Initiative aims to ‘attract the iron filings of un-discipline’ 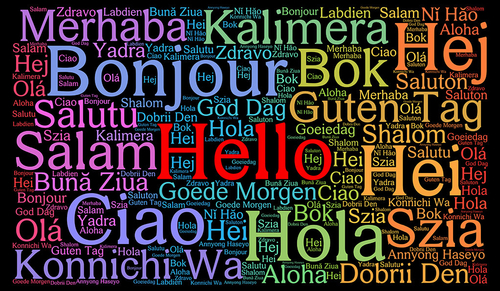 In a Feb. 2017 lecture, “What Translation Means: The Extent and Impact of Translation in America” at the Whitney Humanities Center, Harold Augenbraum, a career translator and now acting editor of the Yale Review, outlined an argument for creating a center at Yale to support a new kind of translation studies that would “attract the iron filings of un-discipline” from across the university.

In fall 2018, the concept of a deeply interdisciplinary center for translation studies became a reality: the new Translation Initiative at the Whitney and Betty MacMillan Center for International and Area Studies, a hub to support all scholarly activities at Yale that involve translation, led by inaugural director Alice Kaplan, the John M. Musser Professor of French, with Augenbraum as associate director.

Historically, according to Kaplan and Augenbraum, there’s been a divide in the way the academy studies translation — usually approached as either theory or applied practice — with no home for the study of what they call “translation in the lived environment.” In the lived environment, our increasingly globalized world, translation has become essential to all arenas of public life, he said. The quality and availability of translation impacts the work of businesspeople, medical professionals, diplomats, military personnel, police, scholars, and average consumers.

“Translation is a ubiquitous process that underlines research across the university. So, the question becomes: How does the university respond to something as global and massive and important as this? Usually academics zero in on a specialty, but we’re doing the opposite,” said Kaplan. “Literary translation is still Yale’s historic strength, but we’re zooming out. We want to capture this phenomenon every way we can.”

From the start, Kaplan and Augenbraum knew to position the initiative as capacious enough to contain the studies of translation in the lived environment in addition to translation theory and applied practice. They had previously collaborated on a translation studies project while Augenbraum was the executive director of the National Book Foundation. It was during that earlier project — a broad examination of the annual translation activity in major American publishing houses — that the two first appreciated the full extent and complexity of “lived environment” translation and also the present lack of academic infrastructure to properly study it, explained Kaplan.

They decided that they needed to assess for themselves how well-positioned Yale was to create such an infrastructure. With help from Tamar Gendler, dean of the Faculty of Arts and Sciences, the Yale Center for Network Science, research assistant Laura Marris ’10 B.A., and Audrey Augenbraum, a social science researcher at Columbia and Augenbraum’s daughter, they created a map of all the Yale scholars whose work touches on translation in some part. This topography of translation turned out to be even more extensive than either had expected.

The map showed translation work at Yale to be a sprawling, highly-connected landscape, with upwards of 60 different primary language nodes and twice as many links between them. In total, 360 scholars at Yale work on translation in some capacity, but the majority of those researchers are not housed in a languages and literatures department, which was a surprise to Augenbraum and Kaplan. Many of the scholars’ home bases are as varied as the School of Medicine and the Department of Political Science.

The variety that the map revealed is why Kaplan and Augenbraum resisted the typical academic choice to “zoom in” in their proposal for what this hub for translation studies would look like. “If we had said, ‘We’re only going to do this,’ we would be excluding 75% of them,” explained Augenbraum. Instead, the Translation Initiative will allow researchers and scholars to ask Kaplan or Augenbraum for help, direction, or connection to other scholars who are already doing similar work, he said.

As of fall 2018, the initiative has been hosting a full slate of translation-related talks from visiting scholars and has convened a faculty working group, coordinated by Serena Bassi, a postdoctoral associate at the MacMillan Center and lecturer in the Department of Italian Language and Literature. Recent programs include: Nicole Doerr of the University of Copenhagen on “Political Translation;” Mark Polizzotti on his new book “Sympathy for the Traitor: A Translation Manifesto;” Loredana Polezzi of Cardiff University on “Translation, Global Health and Social Justice;” and Emily O’Dell, research fellow at the Yale School of Law, on “Translating Sexuality in Iran.”

For faculty in the working group, the Translation Initiative has already proven its value. Evren Savci, assistant professor of women’s, gender, and sexuality studies, said that the working group meetings brought her into conversation with colleagues whom she’d never talked to before.

“My current book project ‘Queer in Translation’ is directly concerned with the travel of vocabulary of gender and sexual politics, so any conversation I can be a part of is extremely valuable to my thinking about these issues,” said Savci. She added that the working group gives faculty “a chance to see who else on campus is thinking about similar questions, so that we can talk about collaborating on joint projects.”

Bassi said she sees this collaboration and connection as fundamental to the success of the initiative. “The activities spearheaded by the Yale Translation Initiative — our working groups, public lectures, and research projects — move from one simple premise: In an increasingly globalized world, it no longer makes sense to see national languages as discreet formations and study them as autonomous, sealed off containers of meaning,” she said.

“Instead, the initiative is working on urgently needed new interdisciplinary research paradigms that are able to engage with the translation politics of a multilingual society in which language is an increasingly loaded site of conflict,” said Bassi.

Upcoming events from the initiative that are open to the Yale community include:

Written by Kendall Teare for YaleNews.