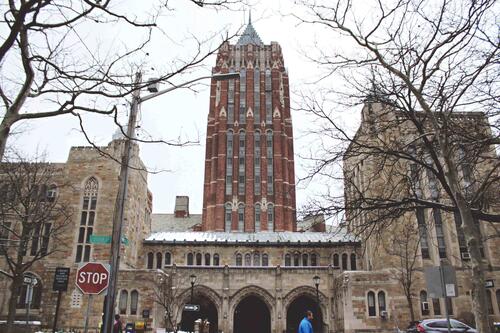 The Yale Translation Initiative recently announced the establishment of both a graduate and undergraduate certificate in Translation Studies that is expected to become available to students next academic year.

The certificate is the result of two years of planning by the Yale Translation Initiative. Founded by Director Alice Kaplan GRD. ’81, professor of French, and Associate Director Harold Augenbraum, former acting editor of The Yale Review, the program has sought to establish itself as an interdisciplinary study of translation. Both undergraduate and graduate certificates will be open to students from across all disciplines.

“The field of translation studies has grown enormously since the 1990s,” Kaplan said in an April 23 panel held by the Yale Interpretation Network, an organization that provides pro-bono interpretation and translation between community members with limited English proficiency and social services. “I’m convinced we need to think about translation not just as a literary issue but in the much larger context of interpretation, machine translation, social justice, health. … All translation is language access, even literary translation — because translation gives you access to a world you wouldn’t be able to know any other way.”

According to Marijeta Bozovic, assistant professor of Slavic languages and literatures and a member of the Translation Initiative’s steering committee, the program’s members originally only planned to create a graduate certificate, but they later realized that they had the infrastructure in place to create an undergraduate certificate as well.

Bozovic described the support from the University for the certificates as “unanimous.”

“Much of the excitement around the project has to do with the fact that this certificate is genuinely interdisciplinary, genuinely a new project — rather than one emerging mostly from one department or preexisting program,” she said.

In spring of 2022, Bozovic will teach the program’s first core seminar, which will serve as a foundational class for both undergraduate and graduate students interested in the certificates.

However, Kaplan also emphasized that the program is meant to extend beyond the classroom and allow students to pursue their learning in practical work, from legal internships to asylum cases. For example, while the required capstone project for the graduate certificate includes writing a scholarly article or creating an original translation of a text, the program also allows students to fulfill their requirement with a minimum of 40 hours of community service in translation.

“My ideal dream is a Translation Initiative that can reach out beyond academics to the community,” Kaplan said.

The certificate’s inclusion of practical work presents a different opportunity for translation at Yale, where in the past, the study and practice of translation have mainly been found in language- and literature-based programs, such as the comparative literature major.

For Luisa Graden ’20, director and founder of YIN and Yale postgraduate Gordon Grand fellow, the new program is a testament to the many spaces that require translation work. During the YIN panel, she noted that student interpretation can allow students to access a diversity of fields, including ones that they may be interested in pursuing in the future.

“I hope that this new [certificate] program will encourage students to leverage their translation skills toward language justice — working to ensure that the Limited English speakers are able to fully participate in their communities,” Graden wrote in an email to the News. “Translation is not just a literary art, it’s also a tool for accessibility, inclusion, and justice.”

She noted that there has been a long history of translators who erase crucial aspects of an original text. Kapan held up as an example a French translator of William Faulkner, commenting that the translator made the choice to ignore the specific language used by African American characters in Faulkner’s work and instead to make the language “more universal.”

“These are new questions for translation studies — and they mirror to some extent our current moment with its awareness of race and privilege,” she said. “So these are exciting debates we need to be having, where translation and the translator … are no longer assumed to be neutral.”

However, Kaplan also made clear that the search for unbiased translation cannot be found with machine translation. By drawing from preexisting usages of words, machines simply absorb all the prejudices that already exist in society, she said.

“You end up with translation machines that are racist and sexist,” Kaplan said.

The Yale Translation Initiative was founded in 2018.

View the original article in the Yale Daily News.